When it comes to providing reliable and accurate appraisals, John Donaldson and Ryan Mahan are among the most experienced evaluators of bloodstock in the Thoroughbred industry. Both career horsemen, they joined together in 2003 to form Mahan & Donaldson, LLC, a leading Thoroughbred appraisal company.
JOHN W. DONALDSON 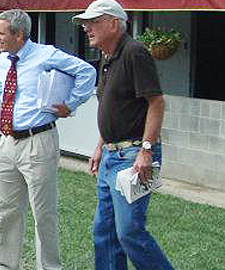 His 45-plus years of hands-on involvement with Thoroughbreds, both as an owner and consultant, began as a veterinary assistant and polo groom in England. From 1979 to 1982, John was employed by Bloodstock Research Co. in Lexington, Kentucky. His responsibilities included buying horses, mare matings and performing conformation evaluations for appraisals.

Since 1982, John has served the Thoroughbred industry as an appraiser and consultant to leading owners and breeders on matters related to buying, selling and breeding. 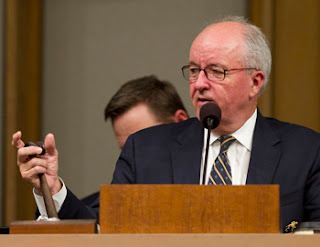 Growing up in central Kentucky,
Ryan Mahan considered following his stepfather, the well-known equine surgeon, Dr. Robert Copelan, into veterinary medicine. Instead, he finds himself in the auction stand at the leading Thoroughbred sales in the world.

Ryan began his career at Keeneland in 1977 as a bid spotter. He then spent several years as chief announcer before being promoted to auctioneer in 1981.

Ryan also serves on the Keeneland inspection committee for the September yearling sale and is the chief auctioneer for Barretts Equine Ltd., the Ocala Breeders’ Sales Company and the Canadian Thoroughbred Horse Society sales.﻿﻿
Home
Subscribe to: Posts (Atom)